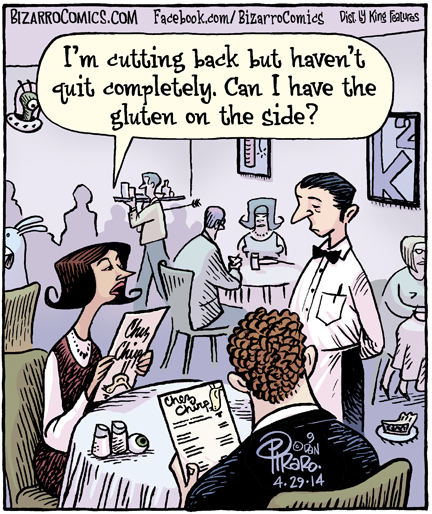 Gluten is one of the most popular proteins on earth, and one that we humans have been eating for thousands of years. So how can something so ingrained in our diet be so evil?

Ever since the release of David Perlmutter’s book, Grain Brain: The Surprising Truth About Wheat, Carbs and Sugar, and others like it such as William Davis’ Wheat Belly, fear mongering over the perils of consuming gluten have reached a crescendo. So what exactly is gluten?

As Michael Specter describes it in his recent article, What’s So Bad About Gluten, “[Gluten] is created when two molecules, glutenin and gliadin, come into contact and form a bond. When bakers knead dough, that bond creates an elastic membrane, which is what gives bread its chewy texture and permits pizza chefs to toss and twirl the dough into the air.”

Although gluten is sometimes defined as being strictly specific to wheat, it is often said to be part of other cereal grains — including rye, barley and various crossbreeds — since these grains also contain protein composites made from prolamins and glutelins.

For people with coeliac disease, gluten is a serious problem, and gluten free dieting is 100% necessary. Coeliac disease is a genetic condition that affects both genders, and people of all ages, and involves the immune system reacting abnormally to gluten, and in turn, causes damage to their small bowel. According to Coeliac Australia it is a disease that now affects up to 1 in 70 Australians; meaning that more than 300,000 Aussies currently live with this life altering disease.

A Fear of Gluten

In Grain Brain, David Perlmutter, a neurologist by trade, states that gluten, “represents one of the greatest and most under-recognized health threats to humanity.” And according to Perlmutter our over consumption of wheat is the lead cause of dementia, decreased libido, depression, chronic headaches, anxiety, epilepsy, and ADHD. This is obviously an outlandish claim, and one that’s clearly based on bias towards a certain kind of diet.

According to Dr. John A. McDongall, an American physician and nutrition expert who teaches better health through vegetarian cuisine, “promoters of low-carbohydrate diets, those high in meat, dairy, fish, and eggs, claim dietary carbohydrates are packed with inflammatory ingredients, and that inflammation is at the heart of virtually every disorder and disease. The evidence linking carbohydrates to inflammation is convoluted, theoretical, and largely limited to an uncommon condition, Coeliac disease.”

While Dr. Axel F. Sigurdsson from the Landspitali University in Reykjavik, Iceland states in response to Perlmutter’s argument that “a number of studies have shown that a Mediterranean type diet has favorable effects when it comes to cardiovascular prevention…. We don’t have to look further than the most recent issue of the American Journal of Clinical Nutrition to find a paper contradicting Dr. Perlmutter’s claims. The study addresses the associations between The DASH diet and Mediterranean-style dietary patterns and age-related cognitive change in a prospective, population-based study. Higher levels of accordance with both the DASH and Mediterranean dietary patterns were associated with consistently higher levels of cognitive function in elderly men and women over an eleven year period. Whole grains and nuts and legumes were positively associated with higher cognitive functions.”

While the recent popularity of the gluten free diet has certainly been influenced by a rise in gluten allergy – with coeliac disease being four times as common as it was 50 years ago according to recent research published in the the journal Gastroenterology – make no mistakes about it, gluten-free dieting is a trend. For anyone who isn’t coeliac: eat bread! eat pasta! And avoid too much fat! Of course we all need to monitor our carb consumption and avoid stuffing our faces full of grains, but is adopting a paleo diet – as prescribed by Perlmutter – really the golden bullet? The ultimate cure to all of humanities health maladies? I think not.